At lunch today, I sat down with my good friend Chris to talk about his volunteer work with a FIRST® Robotics Competition team. He talks about it constantly and is always trying to get me to jump on board as a mentor. I always laugh and tell him that I promise to look into it once I finish graduate school and have a bit more free time. After listening to him and hearing about his experience, I may just have to do it! 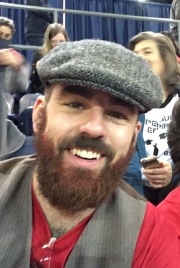 What is FIRST® Robotics Competition?

Chris: FIRST®  is an organization that is dedicated to inspiring, encouraging, and facilitating students to pursue a passion of STEM. FIRST® facilitates four separate competition categories:  FIRST® LEGO® League Jr., FIRST® LEGO® League, FIRST® Tech Challenge, and FIRST® Robotics Competition. The FIRST® Robotics Competition is specifically geared to high school students. Each year, in January, FIRST® releases a Competition Reveal video to kick off that year’s season. The competitions are themed and focus on requiring the robot to perform several tasks.

This year, the competition had a Steampunk theme. The robots had to deliver “fuel” to stations by shooting whiffle balls into a hopper over six feet high. They also had to deliver large plastic gears to an “Airship” in the middle of the field. Each ball of “fuel” delivered and each gear delivered acquired a certain number of points. The teams are placed in “Alliances” of three teams and they compete with their alliance against an opposing alliance. 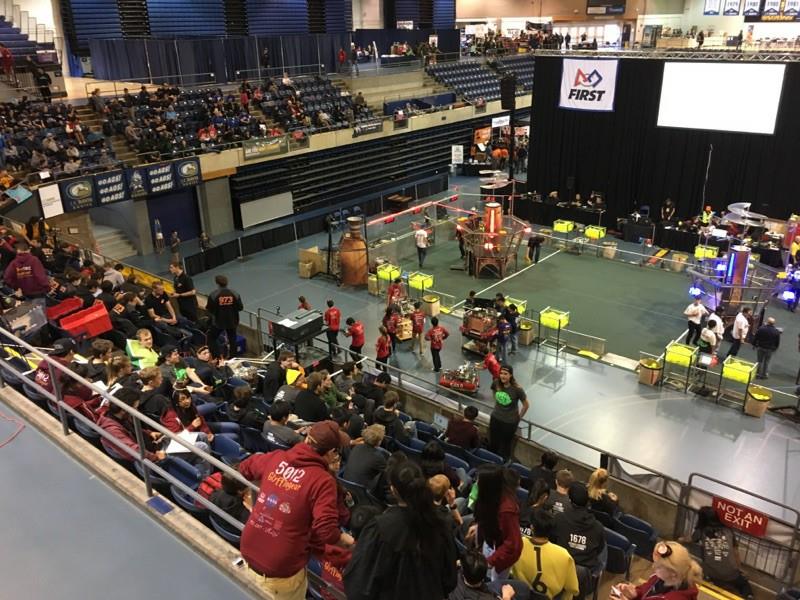 For the first 15 seconds of each game the robot must operate completely autonomously. Then for 2:15 the robots are operated and controlled by the students. The “drive team” has to think quickly and communicate with the other members of their alliance to accomplish the goals of the game. Often, one of the teams will have a mechanical or electrical issue and the whole alliance will have to work together to overcome that robot’s issues and still try and win the match. Not only are the kids learning valuable engineering skills but they are also learning amazing communication and teamwork skills!

How did you get involved?

Chris: When I moved out to Nevada, in 2016, I was unemployed at the time and was looking for opportunities to volunteer and network. I had heard of FIRST® through several friends in Texas and I was put in contact with the head mentor of a new team in the Reno area. I started going to the meetings to see what it was like and realized how much I enjoyed working with the kids and teaching them about engineering and manufacturing concepts. Soon after that I became an official mentor.

What is the goal of the robot that your students are building?

Chris: Each year the goals change. It creates a really good challenge for the kids because they only have six weeks to design and build their robot. During build season, we meet six days a week: Tuesday through Friday after school for about four to five hours and then Saturday all day and Sunday afternoon.

Is there a design process?

Chris: Generally, we start with a day to read through the rule book and work to fully understand the competition. Then, we spend another day working on deciding what strategy we will be using for that season’s competition. We put together a decision matrix and analyze how best to achieve the most points possible within the time limit of the game. Once a strategy has been decided, we turn the kids loose to each develop a “magic” design. At this stage the kids can come up with anything they want to try and accomplish the strategy we decided upon as a team. Usually these designs involve a lot of, “Magic happens” explanations. In the end, the designs get narrowed down into a few really good designs. We then use another decision matrix to decide on the robot that we want to build. 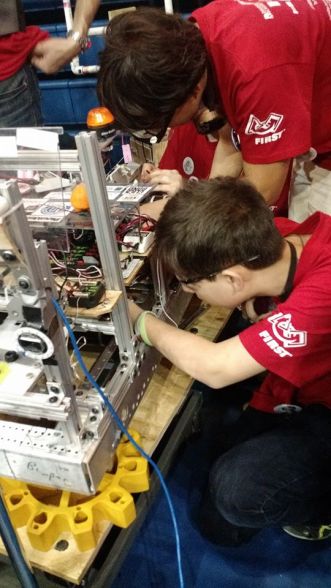 The kids, themselves, do all the design work and all the construction. As a mentor, I am generally there for simple guidance. I show them how to use tools and supervise them as they cut parts or drill holes. We work to help them draw up their designs and make sure they have everything dimensioned properly. Some of the kids are learning Solidworks and we help teach them how to model their designs in 3D.

Often, the kids just haven’t been exposed to the technology that can help solve their design problems. As a mentor, I will often point them toward online information and resources to show them what kind of equipment and designs already exist. Sometimes we can buy a part or a mechanism to accomplish the task but often the kids will re-design a concept to meet their needs and then build it themselves.

What tools and materials are they working with?

Chris:We mostly use basic tools like a band saw, drill press, and hand tools. Often we utilize 80-20 style aluminum extrusions to allow for easy assembly. When we can, we will 3D print parts. Occasionally, the kids will need a part precision machined. Due to insurance concerns the kids cannot use the CNC equipment but generally myself of another adult will machine the part and have the kids watch and learn as we work.

Do the students write their own code?

Chris: The students code and wire the robot entirely on their own. The mentors guide and teach them about how the different electrical components work and how to program. This year they used LabVIEW to excellent success. There are lots of examples available online through the FIRST® network as well that they can utilize and adjust to meet their needs

What is your favorite thing about mentoring the students?

Chris: These kids are brilliant. They come up with ideas that I would never have considered, and their ideas work! I know I annoy the crap out of them because whenever they ask me a question I respond with another question. It’s amazing how quickly they can find the answer to their own questions with just a few guiding questions!

In our team, we make sure that the robot is entirely designed and built by the students themselves. We only contribute through guidance, questions, and teaching. Even when I teach about a concept, I will present the information carefully as to not control their decision as to the best method to use. Often times I will look at their decision and think to myself that it would never work, but they will build it and I’ll be proven wrong!

My absolute favorite thing though is seeing understanding and delight in the kids’ faces when they grasp a technique or accomplish a challenging design. They are learning concepts, methods, and abilities that will give them an advantage for the rest of their life!

What would you say to encourage other student to get involved in FIRST® teams and competitions?

Chris: Come try it. It’s addicting! There are also college scholarships available to FIRST® participants, but mostly, we just have an amazingly fun time using cool tools and methods to build awesome robots. 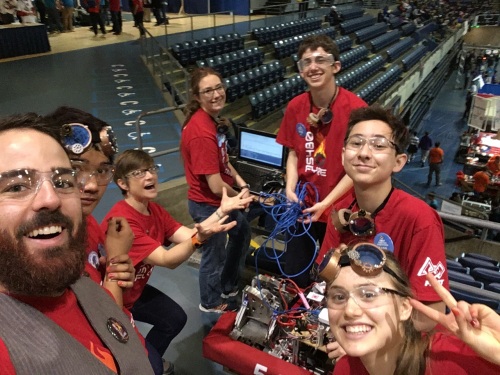 Alright, Chris, you may just have a new mentor coming on board next season! I have previously judged a FIRST® LEGO®  league competition but this age group, in the FIRST® Robotics Competition, takes it to a whole new level.

Have you participated in a FIRST® event before? Leave a comment and tell me about your experiences; I would love hear them.

If you are interested in being involved, joining, or starting a team, let me know, and I will do my best to get you in contact with the right folks!